A woman has revealed that her cousin is furious she told his girlfriend that her outfit was ‘inappropriate’ after she showed up to their great-grandmother’s funeral wearing a bright orange flannel shirt and denim shorts.

Reddit user punchdrunksunrise took to the ‘AmItheA**hole’ forum to ask if she was in the wrong for confronting the 19-year-old and advising her to wear dark colors the next time she attends a funeral.

‘My great-grandmother passed away a few days ago and her funeral with this morning. High Roman Catholic Mass. She was 103,’ she wrote, explaining that her cousin ‘Joseph’ brought his girlfriend ‘Raven’ to the full ceremonial mass. 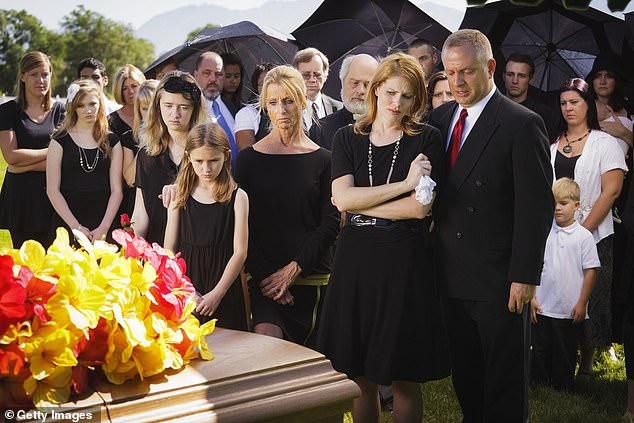 Say what? A woman revealed her cousin’s 19-year-old girlfriend showed up to their great-grandmother’s funeral wearing a bright orange flannel shirt and denim shorts

‘They’re both 19 and if my Aunt Sandy is to be believed neither of them work but live in her basement playing video games and smoking pot,’ she noted.

‘Joseph was a pallbearer so he wore a suit. Raven, however, showed up wearing a pair of knee-length denim shorts and an orange and white flannel button-up.’

The Reddit user said Raven ‘didn’t seem to notice or mind’ that everyone was wearing dark, funeral clothes, even though ‘a lot of people were giving her looks and making comments.’

‘My great-grandmother’s children were especially offended,’ she explained.

After the service, they went back to their late relative’s home for the reception, and she eventually found herself alone with Raven.

The woman, who is in her mid-twenties, is the oldest of her generation of cousins and took it upon herself to speak to the teen about her shocking outfit.

‘I very gently told her that her outfit was inappropriate for a Catholic funeral, or a funeral of any kind,’ she explained. ‘Raven got upset and demanded to know if she was supposed to go out and buy new clothes for one event.’

Lesson learned: Many people believe the teen lashed out because she was ’embarrassed,’ but they agreed that the woman has helped her out in the long run

She told her ‘a dark pair of pants and a dark shirt would have been fine’ but stressed that ‘shorts and a bright shirt are not appropriate for anyone’s funeral.’

The woman admitted that she couldn’t believe that Raven didn’t know this and Joseph didn’t try to get her to wear something else.

‘My verbatim words were, “Hey, can I just tell you something? I’m not trying to make you upset, or tell you off, but your outfit isn’t really appropriate for a funeral. Especially one like great-grandma’s, where it’s very religious,”‘ she said.

She advised Raven to ‘keep it simple’ and ‘conservative’ by wearing dark clothing in the future.

The couple left shortly after, and the woman said she later received a text message from Joseph asking her to apologize because ‘Raven was highly offended.’

‘I can see how someone might be embarrassed to have been given a “ticking off” about their clothes but I wasn’t rude or unnecessarily mean about it,’ the woman said.

‘I don’t see why I owe anyone an apology. I didn’t ask her to leave, I didn’t call her names or yell at her. And we were alone. So no one else was listening. Was I an a**hole?’ she asked.

Opinions: Someone noted it is a ‘cultural thing,’ while a few others felt she crossed the line by commenting on the woman’s outfit

Many people believe the teen lashed out because she was ’embarrassed,’ but they agreed that the woman has helped her out in the long run.

‘She only feels like you are [an a**hole] because you called her out and she feels embarrassed/ashamed,’ one person wrote. ‘I see no need to apologize, especially since it probably won’t be sincere.’

‘People learn social norms by observing proper behavior or being told when they are being inappropriate,’ someone else pointed out.

Another added: ‘You weren’t rude at all, and I can’t believe someone would be over the age of five and not know to wear white and orange to a funeral.’

Someone noted it is a ‘cultural thing’ while recalling going to a funeral in which ‘half the people were wearing regular street clothes.’

While the majority of people were on the Reddit user’s side, there were a few who felt she crossed the line.

‘People judging the outfits of someone who takes the time to attend a funeral, especially a funeral for someone they aren’t related to, don’t have enough to do and should be put to work,’ one person commented. ‘Thank her for her thoughtfulness in coming and keep it moving.’

Nail Polish 101: How to Prevent Bubbles in Your Nail Polish (and Top Coat!) || KELLI MARISSA

How To File Short Nails Square

how to WASH YOUR HAIR properly