A pregnant woman says she has had to ban her husband and father-in-law from the delivery room when she gives birth because their obsession with the possibility that she’ll die during childbirth makes her feel constantly stressed and uncomfortable.

The anonymous woman, who goes by MorbidMommy11 and appears to be American, posted on Reddit that her husband’s mother died during childbirth — and that seems to have fueled the fixation that he and his father share that she may not make it through childbirth either.

She said that during her pregnancy, her husband has not only insisted that she make a will, but has also pressured her to ‘inventory’ which possessions he should keep if she dies — and her father-in-law has taken it upon himself to forbid her from getting an epidural. 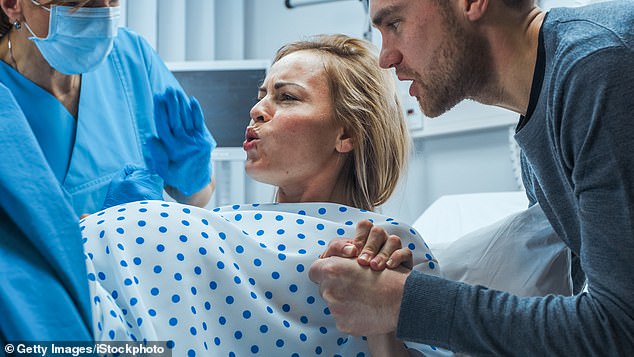 Troubling: A pregnant woman says her husband’s obsession with the possibility that she’ll die during pregnancy is putting a serious strain on their marriage (stock image)

MorbidMommy11 explained that her husband’s mother died while giving birth to him — so now that they are expecting their first, it’s a sensitive time.

She’s tried to be proactive about this, seeking professional help to guide them through — but she suspects her husband isn’t taking it seriously.

‘We met with a marriage counselor to talk things through at the beginning, and he swears he’s been seeing his own therapist twice a month throughout my pregnancy,’ she said.

‘I don’t want to call him a liar, but I’m fairly sure he’s either not going or not talking about the big issue — he and his father (a hugely active part of our lives) are COMPLETELY convinced that I’m going to die in childbirth.

‘They won’t openly admit it, but their behavior has reached the point where it’s constantly making me feel stressed and uncomfortable.’

Some of her husband’s requests have been straight-forward enough: He asked her to make sure her life insurance was up to date, and wanted to draft a will, things that many couples do when they have children.

But then he wanted her to earmark which of her things to keep and dispose of if she died.

My husband, in addition to backing his dad on everything, acts like my due date is my death date, and has completely pulled away from me

‘When husband asked me to go through all of my possessions and “inventory” what I wanted to be saved for the baby vs. what I would want to be returned to my family in the event of my death, I put my foot down and said absolutely not. Too morbid. No way,’ she said.

Her husband also asked her to record videos of herself talking about ‘how happy I am that I’m having the baby,’ which she compares to recordings terminally ill patients make for family.

But her father-in-law — who lives nearby and eats dinner with them several nights a week — was on his side.

‘[He] got on my case about how I was making things “difficult” for my husband in the event that he will be a grieving widower with a newborn,’ she said.

Her father-in-law even stopped by to help her pack up her non-maternity clothes to put in a storage unit — and when she refused, he called her ‘insensitive’ for not ‘making things as easy as possible’ on her husband.

‘I’m just gonna add here that I’ve had a completely complication-free pregnancy and have NO REASON to think I will die screaming in the coming weeks.’

What’s more, MorbidMommy11 says she feels like her father-in-law actually wants her to die.

‘His whole life identity for the past 35 years has been “amazing single dad” (never dated or had close friends or even hobbies really), and it seems like he’s looking forward to being able to guide my husband through what he went through,’ she said.

Her father-in-law also ‘told me he was “putting [his] foot down” about me not being “allowed” to have an epidural or laughing gas.’

Unsurprisingly, she is fed up with his behavior.

‘At this point, I’d honestly be happy to never see my FIL again, and I certainly don’t want him in the delivery room,’ she said.

It’s also put a strain on her marriage.

The US has the highest rates of maternal mortality in the developed world despite spending $50 billion on childbirth annually, more than any other country in the world.

In 2015, 25 mothers per 100,000 live births died from complications related to pregnancy or childbirth.

By comparison, in that same year the United Kingdom recorded nine deaths per 100,000 births and Canada recorded fewer than seven.

A November study by the University of Michigan revealed that the majority of the deaths are caused by pre-existing conditions such as obesity and drug addiction.

Below are some of the other factors commonly cited:

‘My husband, in addition to backing his dad on everything, acts like my due date is my death date, and has completely pulled away from me,’ she said.

‘Every minute with him is morbid, stressful, and a reminder that our marriage seems to be crumbling.

‘No matter how many times I tell him his behavior makes me stressed and upset, it’s just getting worse, and I do NOT want it around me while I’m concentrating on giving birth.’

Now, she desperately wants to ban both her husband and her father-in-law from the delivery room, but is worried that she owes it to her husband to allow him there.

Redditors commenting on her post were horrified on her behalf and offered enthusiastic support.

In responding to them, MorbidMommy11 shared even more troubling details.

He’s constantly staring at my wistfully and reminding me of good times in our relationship, telling me he will (not would!) be lost without me

She said that her hospital only allows two people in the delivery room. She would like her mother to be one of them, but her husband insisted that he needs his dad there.

‘I really, really, really would prefer my own mother be there in place of my FIL,’ she said. ‘My husband said that that’s not fair, as we both need a support person, that he will be mine and my FIL will be his.’

He also insisted his behavior has changed dramatically since before they were expecting.

‘He was never like this before I got pregnant,’ she said. ‘When we got into it about the epidural/laughing gas he told me that the “only important part of delivery is a healthy baby,” that medical intervention for the mother is inherently bad for the baby, and when I said “my comfort is an important aspect of the birth” he told me “your comfort in this process is irrelevant.”

‘It’s like he’s been replaced by a different man,’ she added. ‘I don’t know what to do anymore.

‘He’s constantly staring at my wistfully and reminding me of good times in our relationship, telling me he will (not would!) be lost without me… his mere presence drives up my heart rate at this point, and I’m still over a month out.’

PERFECT EYEBROWS TUTORIAL | Everything You Need To Know

24 ULTIMATE BEAUTY HACKS TO SAVE YOUR MONEY