Chocolate muffins, ice cream, juicy pork joints and heaps of Yorkshire pud. It’s easy to pile on the pounds when these are your favourite foods — particularly if you’re a pampered pet.

According to the People’s Dispensary For Sick Animals (PDSA), the UK’s leading vet charity, Britain’s obesity epidemic is affecting our pets, too, with up to 50 per cent of dogs and cats overweight or obese.

To redress the balance, the PDSA has created the Pet Fit Club slimming competition — a six-month diet and exercise challenge to help pets battle the bulge. Here, in their sleek glory, are this year’s top slimmers.

Luigi was very active until he was neutered. Then owner Perrie Eedy — who lives in Newport, Wales, with her husband Matt — became ill with endometriosis.

‘Some days I couldn’t get out, but he enjoyed cuddling on the sofa,’ she says.

The pounds piled on and slow roasted pork was a favourite. When Perrie left a joint in a hot oven, she assumed it was safe. But Luigi opened the oven and devoured its contents.

Perrie signed him up for Pet Fit Club, where a plan was drawn up to give him two meals of carefully weighed diet dog food and more exercise.

There were a few slip-ups. Perrie says: ‘He stole a cake I’d left cooling on the kitchen counter. My poor husband was left without a birthday cake!’

Over six months he lost 30 per cent of his bodyweight reaching 3st 3lb — his perfect weight — and won the slimming competition. His prize was a year’s healthy pet food and a pet-friendly holiday. ‘The change in him is unbelievable. He’s like a puppy again,’ says Perrie. 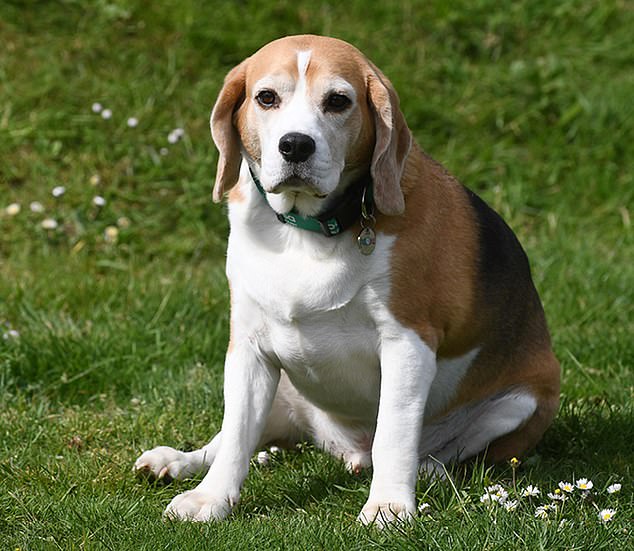 Luigi the Beagle had been very active until he was neutered. After discovering Sunday roasts his weight ballooned to 4st 8lb 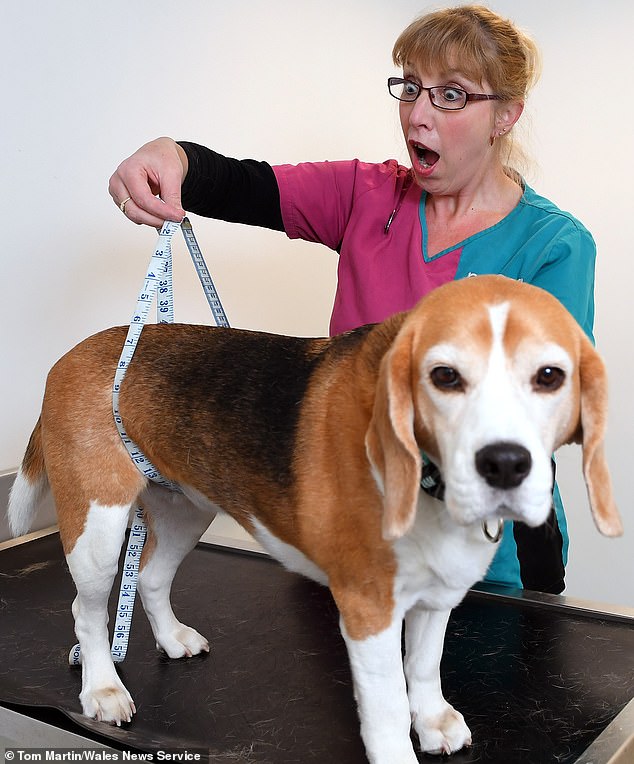 But, after going on a diet, the dog from Newport, Wales, managed to shed 1st 5lb. He is pictured with shocked nurse Karen Jones at PDSA vet centre

A FAMILY FAVOURITE IS BACK IN THE SWIM

With five grandchildren arriving armed with treats, Alfie the labrador was rarely without a titbit.

He was 90 per cent over his ideal weight of 5st 1lb and a PDSA vet warned owners Antony and Irene Mather, both 76, from St Helens, Merseyside, that he was already showing signs of arthritis.

After six months on a Pet Fit Club diet, he lost 2st 3lb.

Although Alfie must lose more weight, Antony and Irene say the change is staggering. ‘Now he sprints and jumps in the lake for a swim — something he couldn’t have done six months ago,’ says Antony. 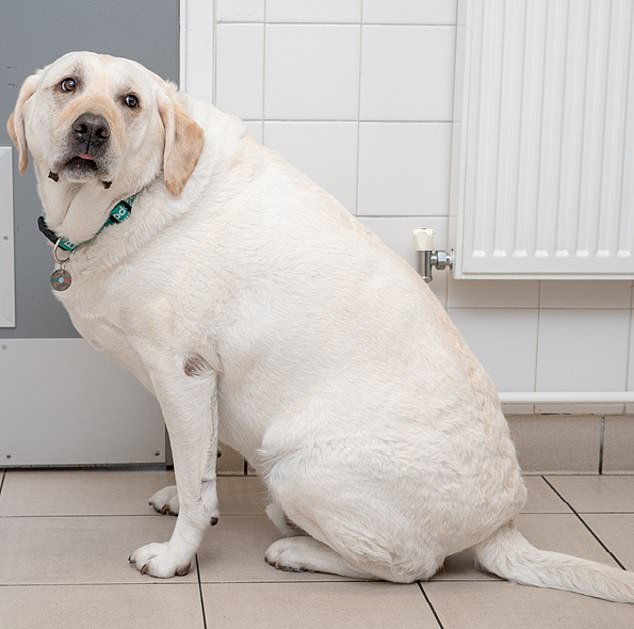 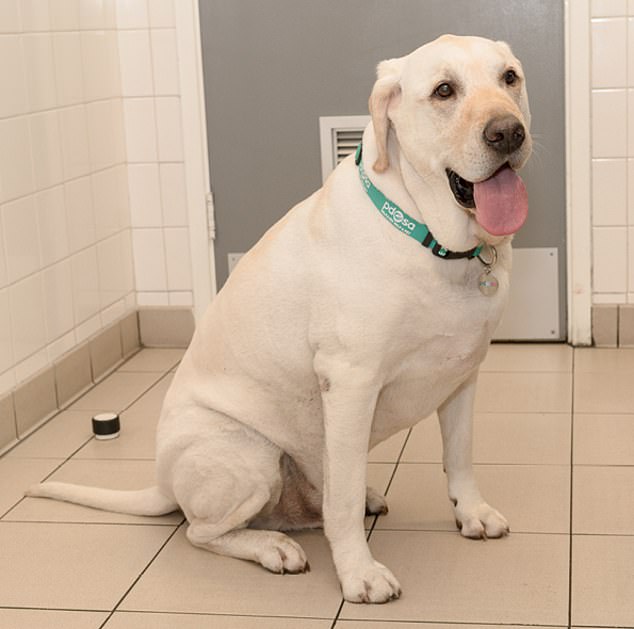 But, after six months on a pet fit club diet, he managed to slim down to

MICROCHIP MEALS FOR A CRAFTY KITTY

Sparkx was bought as a replacement for a much-loved family cat, who died aged 20.

‘I lavished her with cat milk — and love,’ says owner Christina Jacobs, 29, from Moss Side, Manchester.

When Sparkx’s two brothers, Goldie and Brownie, came along, she started stealing the food from their bowls. Soon, she wasn’t able to jump on the bed or sofa.

The Pet Fit Club plan involved microchip feeders to stop her eating from other bowls. She wore a collar with a chip corresponding to her bowl — others wouldn’t open for her.

Christina says: ‘She still tries to nudge the boys out the way to steal their food. But I keep a closer eye. And she’s more playful now.’ 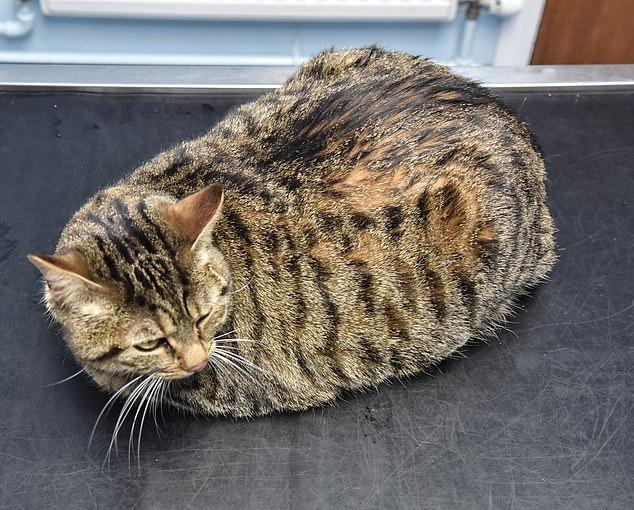 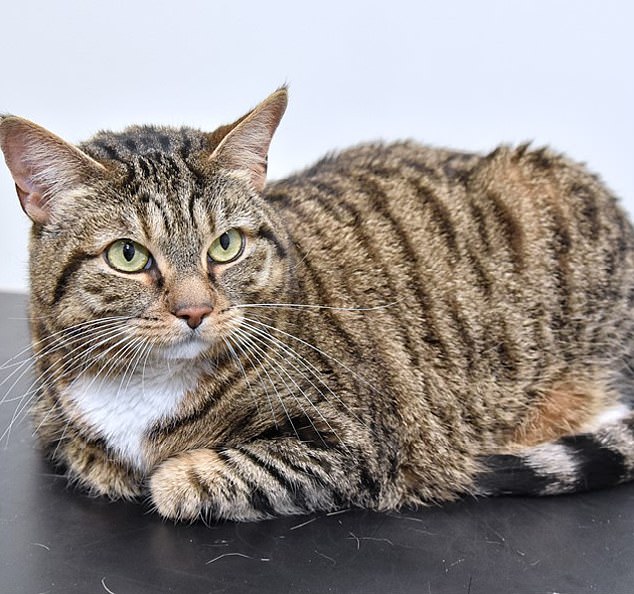 But, after reaching 1st 2lb, a cat diet has managed to get her down to 1st

PUG WHO LOVES HUGS AND TREATS

Percy’s talent for begging and passion for lying in bed all day meant his girth drew gasps whenever he left the house.

When she signed him up for Pet Fit Club, he weighed in at 2st — around 40 per cent over his ideal weight of 1st 6lb.

‘I was shocked,’ says Chloe. ‘I wouldn’t like people to think I was being cruel. We gave him treats because we love him.’

A strict diet plan was drawn up to complement his three or four daily walks.

Percy still has 3lb to lose. ‘He took to it really easily,’ says Chloe. ‘He’s more sprightly on walks, but he’ll still curl up next to you for a cuddle.’ 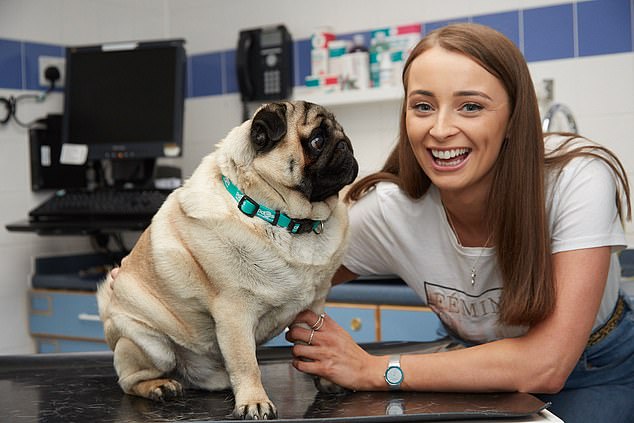 Pug Percy enjoyed spending his days begging and lying in bed, meaning that his girth grew so much that he gasped whenever he left the house (Pictured with owner Chloe) 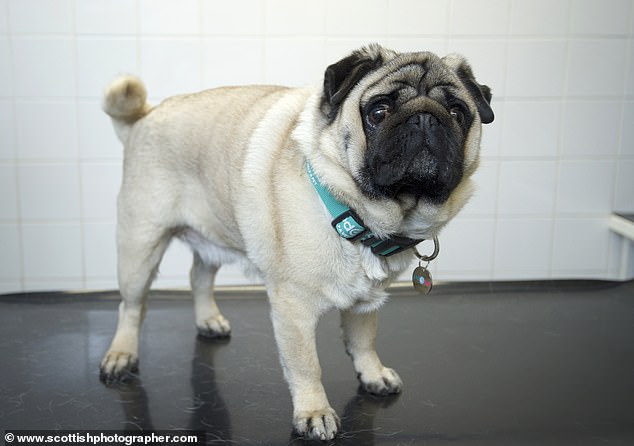 As soon as she heard the Mr Whippy ice cream van, Missi the American bulldog would be in line, waiting for her favourite treat. Soon, she was waddling and unable to climb the stairs.

Owner Gemma Slattery, 24, from Walsall, in the West Midlands, says: ‘She started biting her paws due to the pain of her excess weight.

And she suffered from joint problems.’ At her Pet Fit Club weigh-in, Missi was 6st 13lb — 75 pc over her ideal weight of 3st 13lb. Gemma traded ice cream for diet dog food and upped the exercise.

While Missi lost 1st 9lb and became first runner-up, Gemma also shed a stone. ‘We’ve been on a weight-loss journey together — and this is just the start.’ 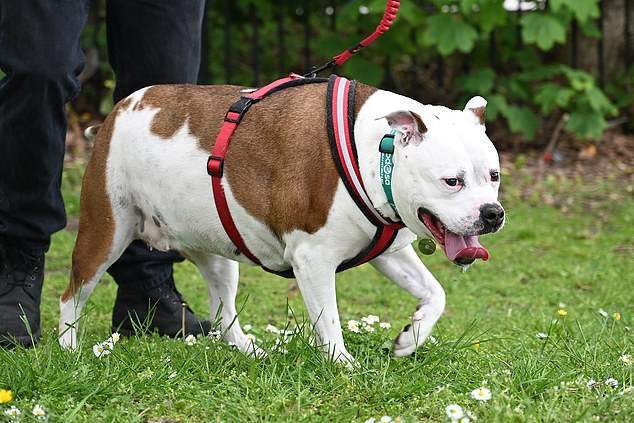 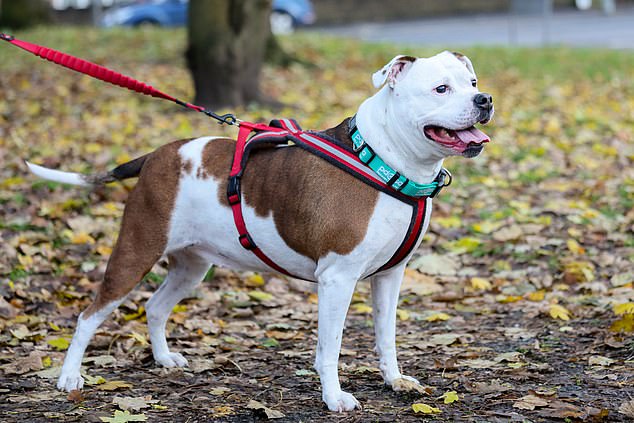 But, after suffering from joint problems, her owners decided it was time for a change. The dog managed to loose 1st 6lb

Send us their pictures and tales at femailreaders@dailymail.co.uk

View All
Makeup Tips For Women