Two young brothers who work as gravediggers in Syria have recalled the harrowing sights they witnessed under ISIS rule.

Jawad, eight, and Yazan, 15, should be in school, but they spend their days tending to dead bodies with their father Ghassan, who doesn’t have the money to provide them with an education.

As well as digging the resting places, which they do by hand ‘for a small child’, the pair clean and fetch water for the graves, starting as early as 6am and working until sunset.

The family are originally from Aleppo, where they lived under ISIS rule and lost several members of their family during air strikes. 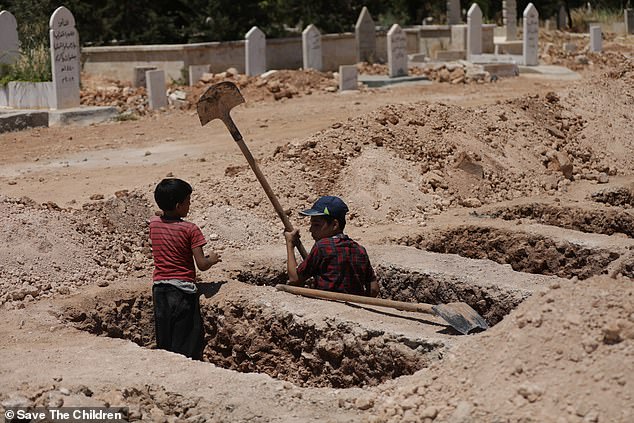 Jawad, eight, and Yazan, 15, should be in school, but they spend their days working as gravediggers and tending to dead bodies with their father Ghassan

They eventually fled to the outskirts of Idlib during the battles to recapture the city, and are currently working with Save the Children through one of its partners on the ground, Violet.

The charity has provided the family with food distribution as part of their emergency response and their case management team is currently working with the family to find a way to get them back into school.

Speaking about living under ISIS control, Jawad said: ‘[They] used to kill people, chopping off their heads.

‘They’d cut up women, they’d hang them up at the roundabouts. Once they killed a woman and all her children were hung at a square. 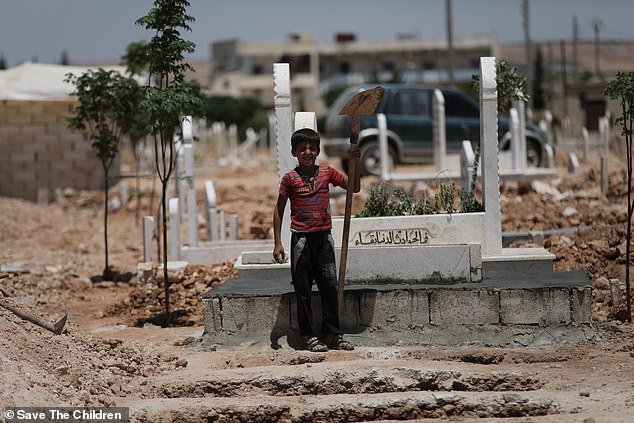 ‘I [used to] play with either a small plane or a small car. I’d go outside to play with them… my friend would come and bring the planes, he would bring his toys and we would play.

‘But now there isn’t anyone to play with. They’re dead. They died after we were displaced. They were killed by strikes from the planes.’

Yazan told how before they left Aleppo, they lived on his aunt’s farm and looked after it, while his dad earned a living polishing stones. 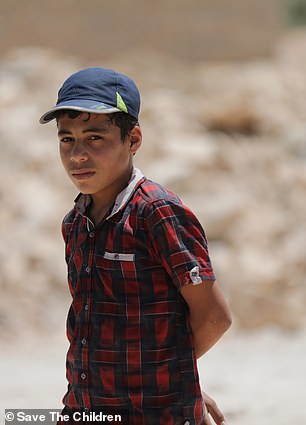 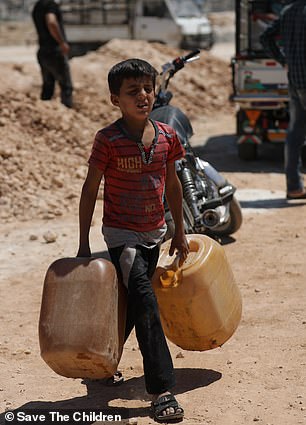 As well as digging the resting places, which they do by hand ‘for a small child’, Yazan (left) and Jawad (right) clean and fetch water for the graves

He said ISIS threw them out because they wanted to turn the property into a rocket factory – then two weeks later they visited their uncle’s house which got bombed that same day.

‘I had just gone to get some bread from our neighbour on my way back from work and as I was two or three metres away from my uncle’s house, I saw the explosion,’ Yazan recalled.

‘I heard my uncle shouting. I looked and found my uncle stood outside next to the door as well as grandad and another relative

‘My uncle ran on top of the rubble trying to dig and find his children. We ran and stayed at my grandfather’s house.’ 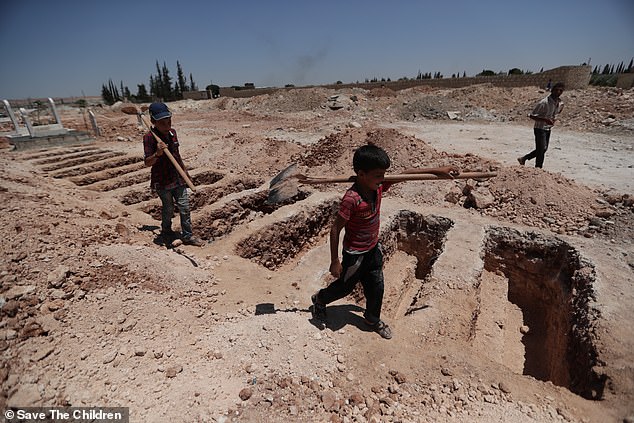 Now living on the outskirts of neighbouring city Idlib, the boys help their father at the graveyard, where he earns around £1.30 (1000 Syrian liras) a day

Jawad revealed that only their uncle and his son and daughter survived the bombing, adding: ‘My aunt was by the windows indoors and she flew out onto the street.’

Yazan told how during the war they witnessed a woman killed by stoning and a man thrown off a building.

‘Life became a disaster,’ he said. ‘The hardest thing is seeing the bodies on the ground. The faces of the innocent, dead people.

‘To see a man chopped up to pieces, carried away in sacks. This is the hardest thing we witnessed.’

Now living on the outskirts of neighbouring city Idlib, the boys help their father at the graveyard, where he earns around £1.30 (1000 Syrian liras) a day. 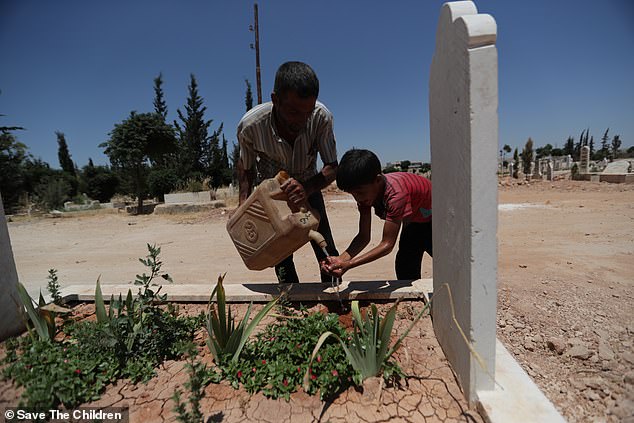 ‘I am not afraid of working here because they are dead – once a person dies, his life is over anyway,’ Jawad explained.

‘I don’t play with anything here. I just sit with my father, and if someone comes to the graves, I fill water for him and help. If no one came or if they don’t give us money, we ask them for a tip but sometimes they don’t give it.’

Yazan told how he tends to the plants and collects water for them and to mix cement if a dead body arrives.

‘We don’t normally dig the graves ourselves, we do that using machines (a compressor), but if it is a small child, then we dig them by hand, like a square shape,’ he went on. 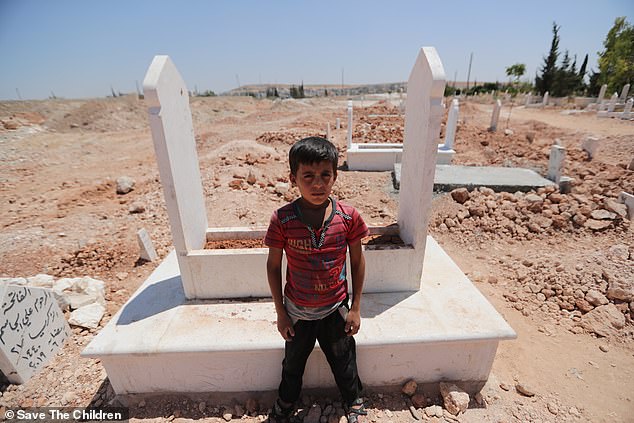 Both boys dream of being able to go to school, while Jawad hopes to some day get work where he can ‘fix engines’ and earn enough money to buy toys

‘I have dug three graves with my father. Once they came here to bury someone at 11 at night. I stayed with Dad and walked among the graves to bring stuff.

‘What’s there to be afraid of? They are humans just like us, but they went into their graves and remained there. There is nothing to bring them out [of their graves] now.’

Both boys dream of being able to go to school, while Jawad hopes to some day get work where he can ‘fix engines’ and earn enough money to buy toys.

‘I wish I can have toys and a ball I can play with. I wish my siblings would get toys too. I just wish that,’ Jawad said.

Yazan added that he misses his old life ‘a lot’ and feels envious of his friends who get to go to school. 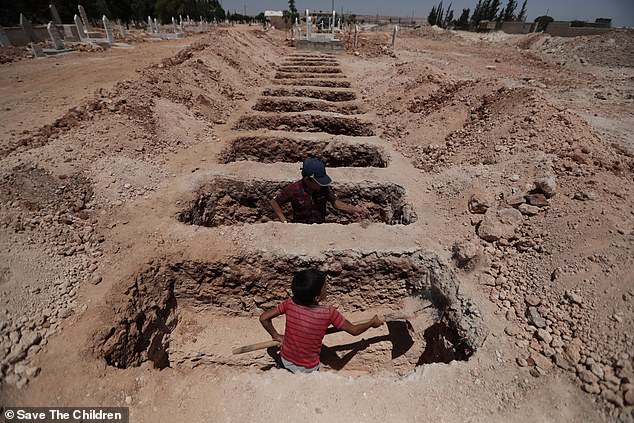 ‘To see my friends: one who has a certificate of achievement and another who had passed his exams, and I watch and say, “Please God, if only my dad would get the money so we can enter schools”,’ he explained.

‘Dad has no money, so if we wanted to buy a school bag, we have no money. If we wanted to be at school, we would need good clothes, notebooks, pencils and erasers.

‘I dream about going to school and to learn, me and all my siblings. I hope everyone communicates with everyone else and Syria becomes safe.’ 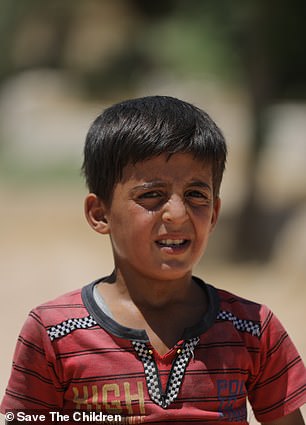 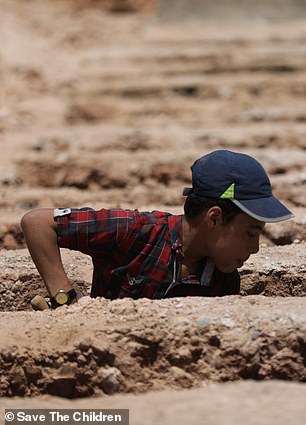 The family are currently working with Save the Children through one of its partners on the ground, Violet (pictured left: Jawad, and right, Yazan)

Their father Ghassan said he would love to be able to provide his children with an education, but their situation doesn’t allow for it.

‘If I wanted to send a boy to school, he would need decent clothes, he’d need to be prepared for school,’ he said.

‘We don’t have money. I wish they could stay at school. It’s not that I don’t want to send them. Quite the opposite.

‘It is a shame for them to work in this sun, they come with me from 6am until 7-8pm in this sun. The poor children, they don’t deserve this.’

Save the Children is supporting children, including Jawan and Yazan in Syria. To donate to their Syria Crisis Appeal visit www.savethechildren.org.uk/syriacrisis.