Anne Hathaway has opened up about being asked to gain 20 lbs. for her upcoming movie role, as she states the idea of being ‘thin’ still dominates most of Hollywood culture.

The 36-year-old actress recently announced she was pregnant with her second child; but prior to her pregnancy, she actually gained weight for her upcoming role in Netflix‘s The Last Thing He Wanted — which is set to release on later this year.

When speaking to Allure for its September issue, for which she was chosen as the cover star, Anne spoke about what the challenges of gaining weight for a role based on how the Hollywood environment still is today. 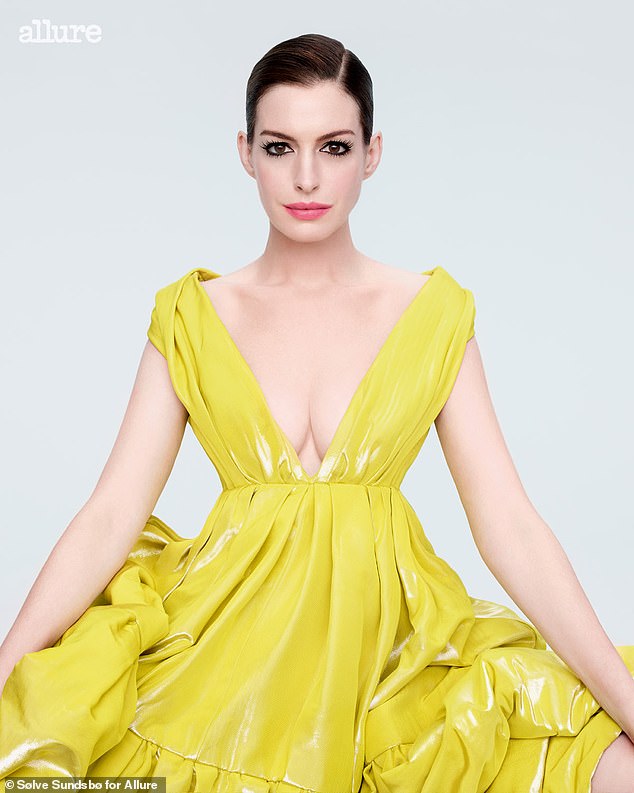 Fighting expectations: Anne Hataway, 36, spoke about gaining 20 lbs. for her role in Netflix’s The Last Thing He Wanted movie in an industry that’s central ‘normal’ is being thin 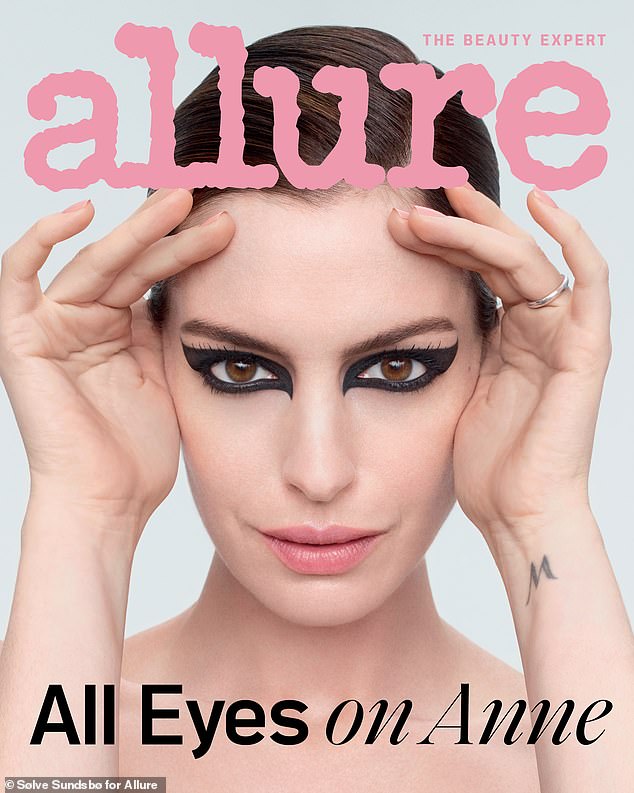 Opening up: Speaking about gaining weight for the role comes as Anne stars on the cover of Allure’s September issue modeling a Black Swan-style makeup look

The actress readily agreed to gain the weight for the Netflix movie, where she plays a woman named Elena McMahon who quits her job as a journalist to join a covert governmental agency, however she admits that she was reminded of the many years she spent being trained to maintain a certain body type.

Anne also noted that she has found conversations surrounding what the ideal image of a female’s body is still exist in Hollywood, although she concedes that people are becoming more and more accepting of the fact that women are all individual. 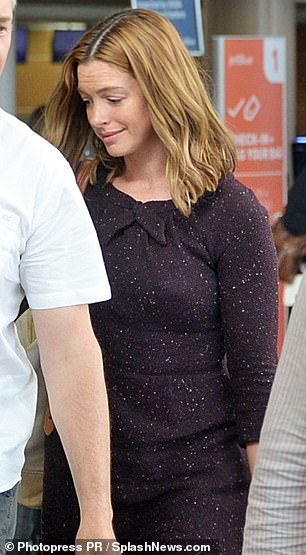 Easy going: Anne said she was happy to gain the weight for the role. But she remains wary about how Hollywood has changed about body inclusivity

’20 years [after being told not to gain weight] I have Ane Crabtree [costume designer for The Last Thing He Wanted] asking me what my body does on my moon — which I realized meant my period — so she can make adjustments for me,’ she said.

‘It was just this beautiful thing…’

The soon-to-be mother-of-two, who announced her second pregnancy just a matter of weeks ago, admitted however that she remains wary of being too positive about the changes she is seeing – noting that there remains a opinion that being ‘thin’ is preferred.

‘I am cautious in my praise of how Hollywood is shifting,’ she confessed.

‘There is so much more body inclusivity — which is great — but the thin thing is definitely still the centralized “normal” expectation.’

Despite still seeing the push to be thin as the ‘normal’ expectation in Hollywood, Anne said she did see brighter days ahead for women in her industry.

‘It’s allowed for more interesting characters and stories. Now the big question is are audiences appreciating it? If it’s not supported, it won’t continue. It will go back to the way it was, and people will say, “Okay, that didn’t work.”‘

When it comes to her own body, Anne has proven herself to be capable of poking fun when the time calls for it. 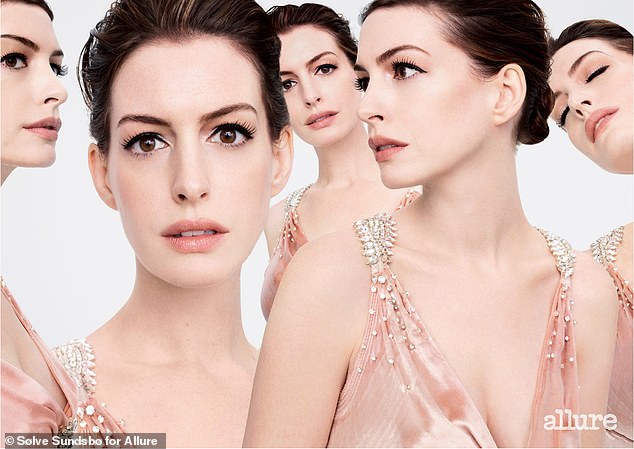 Same normal: ‘There is so much more body inclusivity — which is great — but the thin thing is definitely still the centralized “normal” expectation,’ Anne said 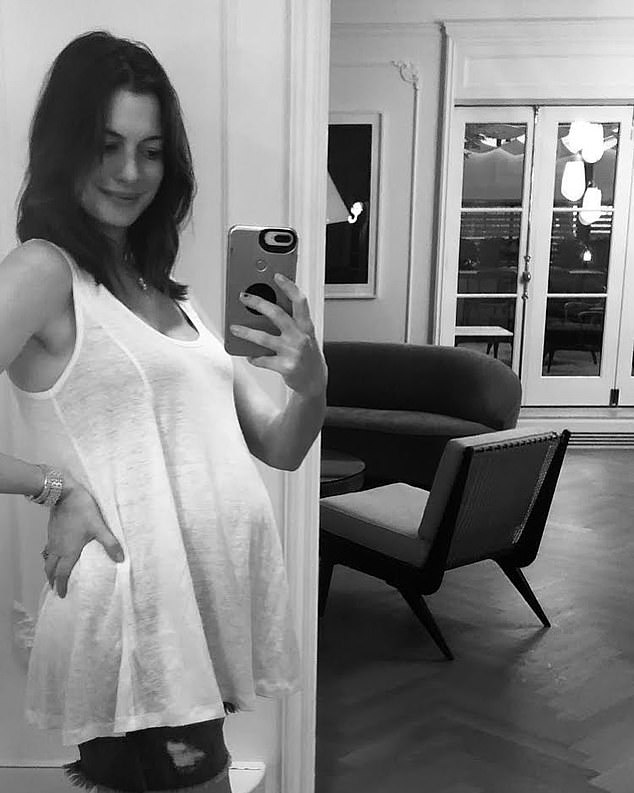 Announcement! Anne recently joked to followers that she was not gaining weight for another movie when announcing she was pregnant with her second child

For example, Anne joked around with her followers when announcing her pregnancy to the world by mentioning that her latest weight gain was not for any upcoming roles.

‘It’s not for a movie…⁣⁣#2,’ Anne wrote in an Instagram caption while showing off her baby bump.

‘⁣All kidding aside, for everyone going through infertility and conception hell, please know it was not a straight line to either of my pregnancies. Sending you extra love.’

For her Allure shoot however, things were slightly more serious; the actress models a severe Black Swan-style makeup look on the cover of the magazine, which sees her showcasing ‘bold beauty’.

The ballet inspiration doesn’t stop at the cover either; another image from the shoot captures Anne wearing a pale pink dress, with her hair drawn back into a bun, and her makeup left natural to show off her flawless complexion.

Inside its pages, Anne opened up about the other ways in which she had to prepare to play the role of Elena in her new Netflix movie, explaining that she had to tap into the anger of her character.

She thought embracing that emotion affected her.

‘It had a big impact on me because anger is something that’s been a big part of my journey,’ Anne said. ‘Not necessarily neutralizing it, because anger is useful, but learning the whys of it. Learning how to ask, How does this serve me?’

Anne is not slowing down ahead of giving birth to her second child in the fall.

The actress is currently preparing for her upcoming role in the Sesame Street movie and working as a producer on multiple secret projects.

6 Things a Man Should NEVER Show a Woman… EVER!!!